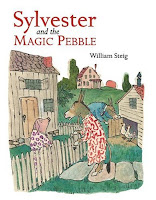 Yeah, I'm calling you pigs, but not because you're police.  Because you're acting like pigs.  Who the hell gets upset over this (the one on the right)? 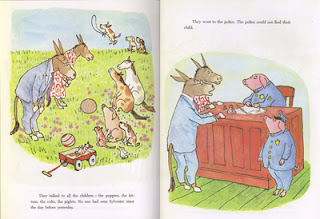 Apparently policemen in the 1970's across 11 states had giant bacon-induced coronaries over this particular picture.  They did not take into account that neighbors and other "people" in the book were depicted as pigs.  They just saw these two sympathetic looking porkers with a couple who have lost their child.  Maybe they should have paid more attention to the text above the piggy heads, "The police could not find their child."

Maybe they couldn't find the child because they were too busy trying to get a book banned because they were depicted as dirty, filthy, ignorant humans.  This kind of behavior from people who are supposed to protect us from crime bugs the hell out of me.  Especially since as a child, the pigs were the last thing I was focused on.  If you're worried about your reputation in literature, focus more on being a model citizen and a model policeman.  Protect the people you are supposed to serve to the best of your ability.  We know you're short on funds and overstaffed, and it's hard to take shit from the civilians, but you're supposed to be the best of us.  Act like it.

The Amber Spyglass
by Philip Pullman

Some of my favorite quotes